The Women’s March on Washington attracted 470,000+ women to attend a rally following the Inauguration of President Donald Trump. These women needed signs and shirts and other messaging devices to promote their agenda, thus capitalism stepped up to help.

In this community event, one local DC entrepreneur, Rebecca Lee Funk, decided to convert her feminist-branded apparel shop to serve the women who were coming to participate in the protests after the inauguration of President Donald Trump. This store became a gathering place for like-minded people to connect, purchase apparel and merchandise expressing their shared views, and exchange ideas on what they would do as their march was kicking off.

I did not film this event to take any specific political position, but instead interviewed this host to better understand why she hosted this event for this community of women that she closely relates to. It was an interesting opportunity to see a side of capitalism tied to a social agenda, supporting the messaging of a group by creating a community event to sell the activists the marketing materials they would need in order to promote a greater agenda in Washington.

The peak experience for this community event could have been multiple things.  For most people attending, it was the opportunity to purchase unique merchandise that had varied marketing and messaging slogans that were related to a common cause.  Another potential peak experience would be getting to know like-minded individuals that were also attending, with the goal of creating a unified movement around a common voice of concerns.

What kind of people attended this pop up shop community event?

Participants at this community event were mostly women who had come to Washington, DC in order to participate in the Women’s March on Washington, vocalizing dissent against the election of U.S. President Donald J. Trump.

Artists at this community event included people who wanted to sell their artwork that carried a common theme message of supporting feminism or women’s rights.

Why would someone want to attend a pop-up shop community event?

Attendees at this pop up shop community event were attending to acquire marketing materials used during the protest activities to voice a common unified message in support of feminism or women’s rights.

What is the Women’s March on Washington?

The Women’s March was a worldwide protest on January 21, 2017, to advocate legislation and policies regarding human rights and other issues, including women’s rights, immigration reform, healthcare reform, reproductive rights, the natural environment, LGBTQ rights, racial equality, freedom of religion, and workers’ rights. Most of the rallies were aimed at Donald Trump, immediately following his inauguration as President of the United States, largely due to statements that he had made and positions that he had taken which were regarded by many as anti-women or otherwise offensive. It was the largest single-day protest in U.S. history.

The first planned protest was in Washington, D.C., and is known as the Women’s March on Washington. According to organizers it was meant to “send a bold message to our new administration on their first day in office, and to the world that women’s rights are human rights”. The Washington March was streamed live on YouTube, Facebook, and Twitter.

The Washington March drew 440,000 to 500,000 people. Between 3,267,134 and 5,246,670 people participated in the Women’s March in the United States. In total, worldwide participation has been estimated at over five million. The Women’s March crowds were peaceful, and no arrests were made in Washington, D.C., Chicago, Los Angeles, New York City, and Seattle, where an estimated combined total of two million people marched.

In attendance: 400+ Clients
Peak Experience Anticipation: See women purchase protest items and coordinate activities.
Peak Experience Actual: Saw women meeting other like minded women and making new friends.
Organized by The Outrage / Rebecca Lee Funk
Unique History: This entrepreneur earned the support of even random strangers to help her with retailing merchandise to protestors in the largest political demonstration since the anti-Vietnam War protests in the 1960s and 1970s.
Unique People: Rebecca Lee Funk
Navigation Hinderances: Easy to find due to the large line around the block.
Initial User Experience Design (UXD) Issues for Visitors / Guests: There was no clear mission statement posted regarding the WHY behind the event.
Amenities: None.
Bathroom: None visible
Security: None present.
CPR (Celebrities, Politicians, Reporters): None present.
Family Friendly: Yes. 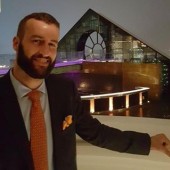